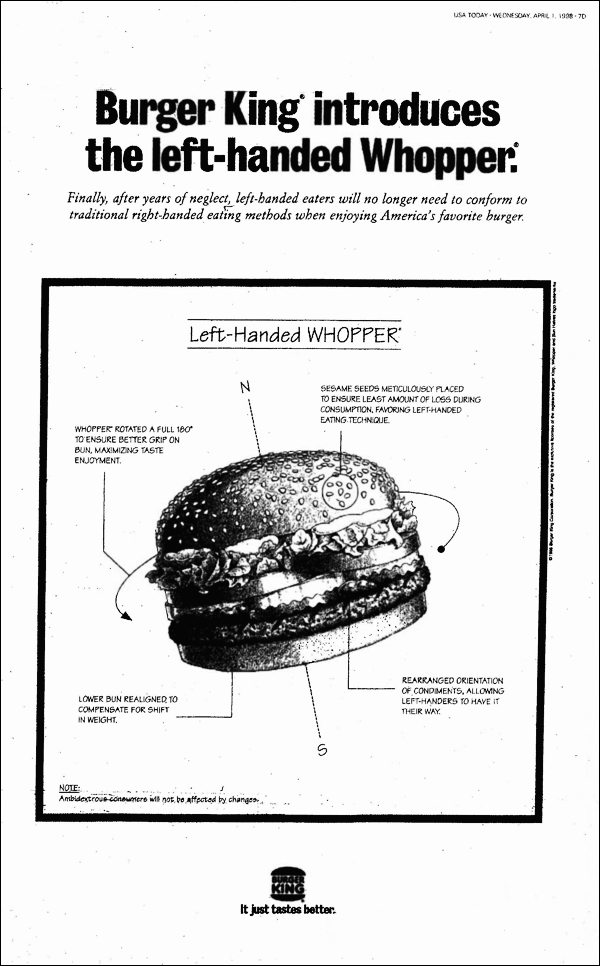 Our clients understand the power of good marketing. However, there are many businesses that either don’t see the value in good marketing, don’t know how to market themselves, or they think they do, and fail.

Understanding the basic idea that people are looking for a personal connection, and that appealing to a specific target market is key to success – and will lead to high returns.

Don’t just take it from me. We think this story is a perfect example of what targeted marketing can do.

In 1998 Burger King announced the Left-Handed Whopper as an April Fools Day prank.

A full-page ad was taken out in USA Today announcing the Left-Handed Whopper (LHW) for the 32 million Americans who predominantly use their left hand. The ad assured people that it used the exact same ingredients as a traditional whopper, but they were all rotated 180 degrees.

Amazingly enough, this marketing stunt worked – and thousands of gullible customers walked into Burger King requesting a LHW. Later on, BK released a press release a statement having to clear up the confusion. They even reported that many people were aksing at the counter, in all seriousness, if they indeed had the “right handed version”, and not the new “left handed” one.

That is right. A clear April Fools Day prank, marketed towards people with Left Handedness, drove huge sales to the point where BK needed to clear up the confusion so they could relieve the congestion of so many customers.

Something else to take away from this story: People can be really, really stupid.